History was made as we stood and saw the space shuttle go up for the last time. While we were waiting for the event, a bomb squad came by as well as police cars and helicopters overhead. This made for a very entertaining time. I am happy to say that even though a bomb was called in there was not one there. I did though, have my husband post on FaceBook that we were on the bridge just in case something happened and people started looking for us!

As I was waiting with the kids, I was also reading a book I had got from my friend Katina for my birthday. It was a book about friendship, but the neat thing was that as I was sitting there reading the chapter, one of the charters in the book was talking about the Challenger, the space shuttle that exploded in 1985. I had already been thinking about this, since I was in fourth grade at the time and saw it in class as it was happening. Things like that just stick with you, so I was praying that this shuttle would be a success and not have such a devastating ending.

Once it did go up I could not help but shed a few tears. It was an emotional time knowing that a part of history was ending. Surprisingly, the twins loved it and wanted to see it again. On the news that night we got to see it again and on our video too. After the launch we headed back to our condo to have some more beach time. I am happy to say we did not have traffic, it was a very smooth day.

The next day the Kennedy Space Center was open and everyone decided to go, including us. We got to take a tour and see the launch pad where the shuttle had launched from as well as many videos telling the history of the space program. I learned so much it just seems amazing that it ever makes it into space with so much that has to take place beforehand and be 100% accurate.

It made me think of getting pregnant and how everything has to be just right for it all to take place. Like the space program, it is hard to comprehend how embryo adoption is even possible. It all seems science fiction, but it isn’t! I am able to take my children on vacation thanks to scientists who spent so many years studying and experimenting that it just blows my mind. I cannot possibly think what is going to take place in years to come. I am reminded of what Julian told my Aunt Nancy he learned in VBS at our church. When she asked him what he was learning he said, “That anything is possible with God.” Not only did I see that in the science on vacation or in Haiti on the mission trip, but I am living it with my two miracles. Thank you God for blessing me so that I can be a blessing to others and I pray that you will be blessed today! 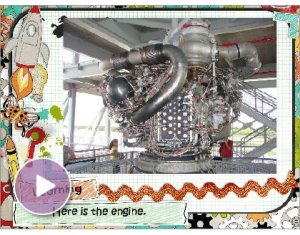 One thought on “ANYTHING IS POSSIBLE”

The purpose of this page is to share information on the subjects of embryo adoption and embryo donation. This venue is made possible by support from the U.S. Department of Health and Human Services under grant #1EAAPA091015-01-00. The statements expressed herein are those of the National Embryo Donation Center and do not necessarily reflect the views of the Department. We ask that participants stay on topic, and exercise mutual respect for their fellow participants. All posts and comments are subject to approval by NEDC New Media staff.